How to trigger a move action to a group of elements?

Hi
I would like to run a move action to a group of elements.
Then in each of those elements I would like to do something if that element has been moved.

If I move the group, then the move action can only be called by the group itself but not by its elements.

Example:
Each time a specific button is clicked, then each of the number should check if their text equals to a variable value (it contains an hour value). If the value of the variable equals to the text of the number element, the element will be set to “selected” to hightlight it. 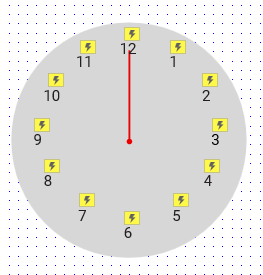 Do I have to move each element separatly or can I do that in a more economic way?

Or can I do something with a “selection group”?

can I do something with a “selection group”?

Do I have to move each element separately or can I do that in a more economic way?

The classic solution would be to use a repeater, but of course repeaters don’t have a built-in radial layout option. With a repeater you would have only 1 element (the clock hour number) repeated 12 times, and triggering its Move would thus automatically trigger all repeated instances. You would gain further economy by having only one Moved action to code instead of replicating it for all 12 widgets. *See below for further discussion on using a repeater in this situation.

Other than a repeater, you could set up a “chain reaction” in which you only move the “hour 1” widget, which tests itself against the variable; if a match it selects itself; else move the “hour 2” widget, and so forth. Something like,

If [[This.text]] equals MyHourVar
Select This
Else if true
Move HourWidget2

If [[This.text]] equals MyHourVar
Select This
Else if true
Move HourWidget3

Or, if you actually move the group (by 1 px) and then immediately move it back (by -1 px), this motion would likely not be rendered in the browser–in other words, you would not notice any actual movement, but each individual widget’s Moved event should be triggered. You might need a way to differentiate the first movement from the second, but if the only action is to select one hour it may not matter that everything moves twice. In other words, if the hour variable is set to “3” and the group is moved by (1, 0) it would mean all 12 widgets would move by (1, 0) and the “hour 3” widget would select itself, then the group would be moved by (-1, 0) and the “hour 3” widget would select itself again–with no resulting change because it is already selected. However, if you are doing something else based on this hour selection you would not want to repeat it twice. In that case, you could try one of the following:

…and the Item Loaded event would have:

Pro Tip: if you do this, move your clock group to location (0, 0) and then note down the location of all the hour widgets, so they’ll have the proper locations in the repeater cell.

Thanks for your detailed answer.
Copy and modify the move action 12 times tooks less minutes than reading this

It is not an elegant but economic implementation.

But maybe I can use one of your approaches later on another project.