I would like to switch pages based on a single, double or triple press on a single key (T).
The logic is quite clear to me, but I don’t know how to realize in Axure

Is that possible to realize in Axure?

One option is to use a ‘checker’ object to drive the condition as you need a temporary store of the key presses. Could probably hide the widget. 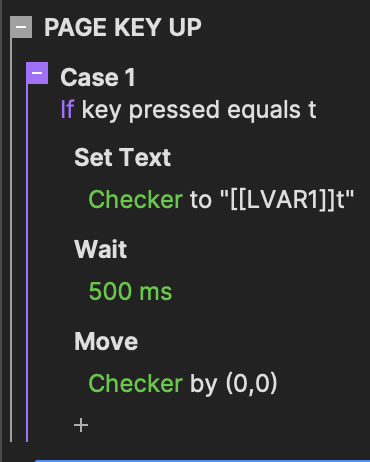 ah yes I remember this mechanism with moving an object to call something like a function.
Although this is not exactly what I wanted (third tap doesn’t react instantly --> also waiting 500ms) this shows how I can do it.

Using a basic “Wait 500 ms” seems like it should be pretty simple and straightforward, but it tends to not work so well. For timing things like this, I’ve found it is more reliable and powerful to use a dedicated timer, which is best practice in any programming language. Unfortunately, Axure doesn’t have a built-in timer available, but you can make one with a repeating dynamic panel. The Wait action is not a true timer and cannot be controlled or canceled after it fires. Although in this example, the result is to open a different page, so most potential failures should be avoided, and when I tested it, it did seem to work pretty well.

@wsnowsf , I kind of like the idea of testing the text length of a widget. For me, incrementing a global variable is more straightforward. On the other hand, the text widget does provide good user feedback for how many ‘T’ presses have been registered (and some programmers just don’t like global variables.) But given your method, since the “Checker” object is testing itself, you can just use [[This.length]] or use the built in “length of widget value” condition without needing to assign a local variable; it’s quicker, and I think the code is easier to read. Also, I would argue any key presses more than 3 should be the same as 3 presses, rather than be ignored. Since @iamable replied that the third keypress should immediately load a page, I’ll assume this is the intention.

I included three different methods, although they all use the same basic approach.