Whack-Emoji / Just another Fun with Random

Axure HQ is back once again with another project from the “Fun with Random” series, following on from previous projects such as Proto-typer!, Grub Guess, Roulette, Spot the Difference, AxZee! and A Game of Cards.

The layout consists of a 3x3 grid, which is 9 individual squares aligned next to one another and set as dynamic panels to enable interactions and the changes of state.

The randomness is contained within a hidden Hotspot on the canvas, which is triggered once the “Start Game” button is clicked. To utilize the Math.random function, the 9 individual squares are named as numbers between 1-9.

By default, generating a random value within a range of set values is inclusive at the lower end of the range, ie “1”; but exclusive at the higher end, “10”. The addition of “+1” to “10-1+1” makes the function inclusive at both ends. This makes it possible for the hotspot to move any of the 9 squares within the grid. After each move, the hotspot is reloaded after 750 milliseconds to trigger the next random move. 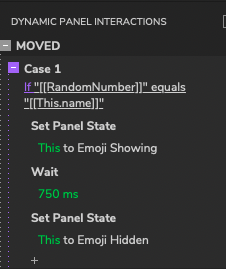 Each of the 9 dynamic panel squares has 6 different states corresponding to one another as well as to the timer and points variables. 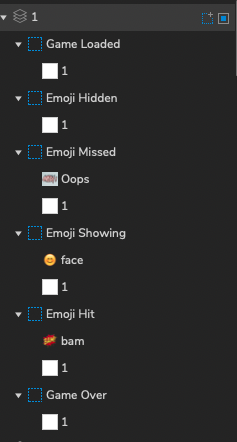 That’s pretty much it if you would like to take a closer look at how this was all put together, you can download the project here: Whack_Emoji.rp (1.7 MB)