Will the action "edit row data" updates the selection state of widgets inside repeaters?

Hey guys, having some trouble here.

I got a imitation homework in college, and I decided object to be Youtube.
I was doing the “comment” part with the like and dislike buttons, so the goals are:

And I make a simple prototype to demonstrate: 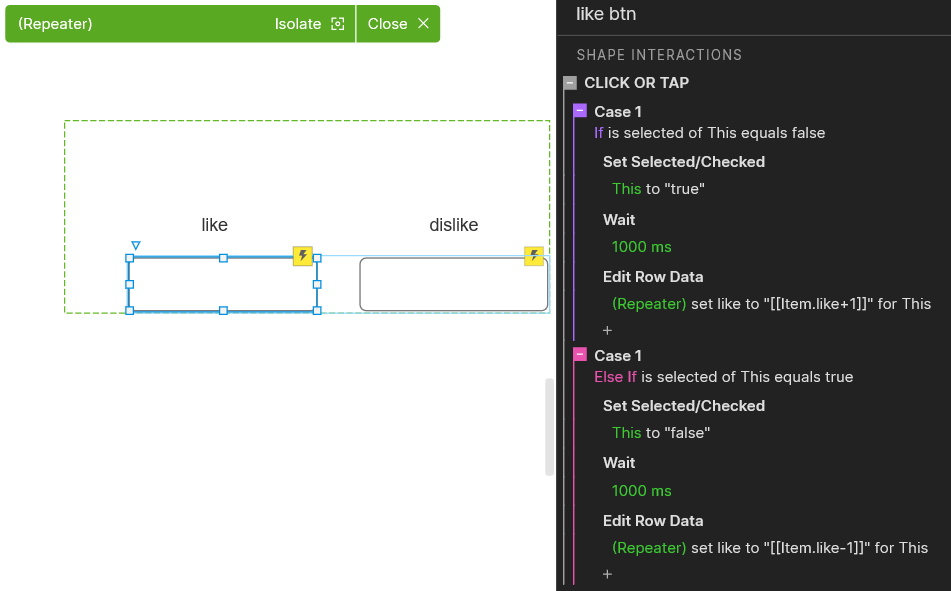 I found out that if you press like or dislike several times, the number just go up and the button won’t turn black, which don’t match with goal 4.

Something must be wrong with the selection state.

After many failed attempt to solve the problem, it came to me that maybe the action “edit row data” updates the selection state of widgets inside repeaters.

So I add “wait for 1 second” actions between selection set and row data edit.

Now the button turns black, 1 second later white and the number goes up by 1.
That might proves me right.

Is there some other ways to achieve my 4 goals and the action “edit row data” to updates the selection state of widgets inside repeaters.
Or is there a bug?

You’re on the right track.

When row data is updated, the entire repeater loads again, so every item will be in its default state unless you specifically account for that in the repeater’s “item loaded” event.

Hopefully this is enough to get you moving again. I don’t want to give away too much since this is for an assignment, but this particular behavior of Axure is not well-documented, so I think this is okay advice to give.

This topic was automatically closed 14 days after the last reply. New replies are no longer allowed.