How to animate a diagonal line connecting two points?

I can do this successfully for straight linear lines by simply setting the size to start from a small width (point A) and then setting the final state to the width to point B.

How can I do this for diagonal lines?? Whenever I try to increase the width of a diagonal line, the entire line itself shifts up on the page.

By “diagonal lines” I assume you mean a Line widget or rectangle widget that is rotated. When you resize a widget, you can specify an anchor point, by default the upper-left corner, but you can change this in the Set Size action options: 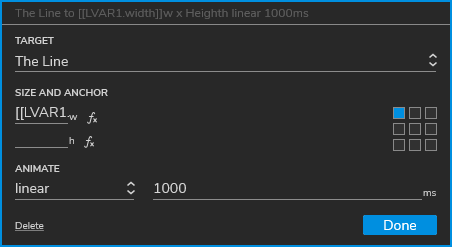 However, when a widget is rotated, the anchors don’t work as you’d expect. They are basically broken if the rotation is not at 0°. I think this might due to the anchor not rotating with the widget’s orientation, as that would cause the drift effect. It should probably be filed as a bug. Now, if you select the center anchor option it keeps the widget stable, but it can only grow/shrink from the center point, and that doesn’t work for your scenario.

When I’ve needed to do something like this, I use a “cheap hack” to fake the animation. Basically, create a line in the editor from point A to point B (you can draw this with the pen tool; you can even use the Connector feature so when you move the “point widgets” around in the editor the line stays connected and resizes automatically. Bonus: you can even edit a widget’s anchor points to customize connection points.) Cover this line with a “masking” widget–like a rectangle with no border and white fill (or whatever to match your background.) To animate the line being drawn, just hide the mask, using an animated transition. See file below for a demo.

I wondered if anyone has posted a better solution, and found this thread:

Here is the challenge: [image] Not expecting to be able to dynamically create a line shape, but rather take advantage of Cursor.X and Cursor.Y to place a preexisting object between the two points (Perhaps a rotated object). Not exactly sure what the simplest approach would be, but checking to see if this has been done before. Thanks!

Check out the resulting tutorial from @nithindavis …it’s the bomb!

Line Draw Simulation Here is a trick/hack to draw a line dynamically on screen. [image] Demo Check out this quick demo to see it work. https://nithindavis.github.io/Axure_demo_lineDraw/linedraw.html Files The Axure file for the same is attached here: lineDraw.rp (57.0 KB) Concept The concept behind this trick is school level Math and Trigonometry (quite basic). If you remember your school days you will recall a very handy theorem called the Pythogaras Theorem, which states that square…

That solution was for RP8, but it works perfectly (for me) in RP9. I applied it to (what I think is) your scenario.

The “Fake It” approach is exactly the kind of animation I’m looking for. How did you create that mask? Thanks!

All I did for the mask was to drag in the “Box 1” widget from the default library (but any rectangle will do) and set that widget’s Border to 0 (zero) (…and ensure the Fill matches the background, by default White, #FFFFFF.) Then size it appropriately and send it back/forward–behind all the widgets except what I need to cover with this mask.

To “animate” you can either hide the mask widget, like I did, or resize it, or move it, or change its opacity …whatever makes most sense or ends up with the visual effect you want.

You have no idea how long I’ve been searching for this!!! Many thanks for sharing.