I am trying to preview my project in my browser the preview button is creating localhost and the interface opens up but there is nothing in the browser. It just opens up like this. 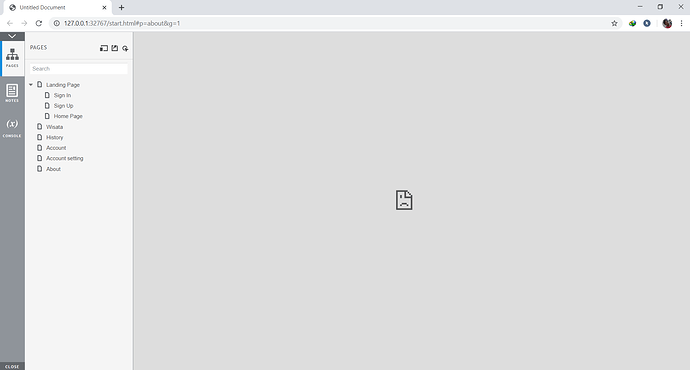 Hmm, is this only happening when previewing the project locally? Do you seen any different behavior when publishing the project to Axure Cloud? Additionally, if this issue is persisting, please try checking your browser’s Console information. If you see any error messages in the Console, please send a screenshot of the errors in this topic, or email them to our support team at support@axure.com. Thank you!

@efendibong I feel this is what you are looking for

Hi, within in the last 24 hours the local preview functionality has stopped working. I’m running 8.1.0.3388 on Windows 10, and don’t recall making any other system changes (although it’s a corporate machine, so I can’t guarantee something hasn’t updated behind the scenes). When I click preview to launch Chrome, the left hand nav loads fine, but the actual page is replaced with a little grey sad face and the message “127.0.0.1 didn’t send any data”. [axure] Have tried reinstalling over the top,…

Hi both, I wrote the original post referenced above, and would reply there, but it’s been locked. It turns out our problem it was a bug in Kaspersky. It affected both Axure 8 and 9. With no success at our end we ended up contacting Kasperksy support. They confirmed everything appeared to be configured correctly at our end, so installed Axure at their end, confirmed the bug, and released a hotfix to us, that was later rolled into the main product.

So I’m not saying you’re struggling with Kaspersky, but as everyone else says, your preview server is probably running, but something is stopping your browser connecting to it.