Future of Axure RP 10 and beyond?!

I read this somewhere but cannot find it again, “If you are using a license key for Axure RP, you will need to purchase a subscription for RP10 when it is released.”

Does this mean that Axure has made the strategic decision to abandon full licenses from now on, and that only a subscription model will be available from Axure RP10 onwards?

I certainly hope not. I love Axure and have been a supporter of it from the beginning. A subscription model does not work for my business where I have sporadic projects throughout the year. I may have only 2-4 projects in a year and would not like to have to pay for a subscription for the entire 12 months, just to be able to open my Axure files.

The argument that I would only have to pay for a subscription for the months that I use it, does not hold either. That is because I cannot review any of my Axure documents unless I have the working product.

For a similar reason, many left Photoshop as it made no sense to them to have to pay an ongoing subscription (forever) just to be able to open and review THEIR files. If Axure follows this model, and considering that it doesn’t have “sketch mode” etc and is starting to look like many other subscription applications, then I am not sure what differentiates Axure from the others.

I love AXURE and always have. So I implore you to keep the licensed option moving forward. Resist the temptation to change. It’s only money and if you do your calculations right in terms of license pricing, then you will only be in front. Please consider.

My company has made upgrades possible fo Axure 8->9 and may this will also work for 10. But buying a subscription is something they would never do.

With huge growing competition in this market, it does not seem wise to switch to the monthly payment model. The company seems to be unaware of its users, and how we use Axure RP. Unfortunately where I work I will not migrate to 10 because this model is not viable.

Agreed - I stopped using ALL Adobe products because the subscription model is only for the benefit of Adobe and not the customer. It is inherently unfair and I will never use another Adobe product that I cannot buy and own. (ironically for Axure, a terrible user experience).
If this is true then Axure would be going from a VERY competitive market place and doing a very poor job or marketing to hammering a large nail in the coffin of Axure. I hope they are not taking a subscription model as I will not be able to support this for me or my team.

Fully agree. So sad to hear this. I liked Axure too, but we use it only occasionally. The UX guys are all using Adobe XD now, but every now and then I show them the power of Axure in an attempt to lure them back. We keep a couple of Axure licenses around, but no way I am going to convince the company to buy subscriptions. Guess that will be the end of it.

While I understand the sentiment, how is this different that subscribing to Sketch or figma. (Well I know sketch’s model is u pay for perpetual usage of what ever was the last version released during your subscription). but pretty much all design tools except for Affinity’s are subscription model

uelsimon I think you have missed the point and you have answered your own question on how this is different to others eg Sketch - Sketch has a perpetual license ($99 one-time payment), and I note that it only works on Mac.

But the issue is bigger than that as the previous comments explain in detail.

I believe that Axure will lose many of its loyal customers, myself included, as this proposed new pricing model does not work for us. Not being able to open our own an Axure files months later unless we continue with ongoing payments, or alternatively to pay a ransom just to be able to open our files in the future, is not tenable for me and many others like me.

If Axure proceeds with this, it will be a decision simply based on how to increase profits. This is therefore purely a money grab unfortunately. That is fair for a corporation to make decisions on that basis, however it does nothing to support their current and previous long-time loyal customer base. There are options to support these people as well as allowing Axure to continue to expand to larger and new markets. Perhaps Axure does not need their little loyal guys any longer. That’s what it feels like unfortunately.

We sincerely hope that Axure management do not go down this path.

ok I hear you. I hadn’t heard anything with respect to how the subscription and usage would work form Axure so I have no comment on that at this point. It would make sense to me to do a hybrid where as long as ur subscription is current, you get the latest updates, and once your subscription lapses, you no longer receive updates, but your last released version still works. which would essentially be the exact same thing as what Sketch does.

I’m not an adobe user. (ever since they screwed up every thing Macromedia gave them), so I don’t know how that works. I’m all Affinity (designer,photo, publisher) for the same subscription reason listed above.

Additionally Axure could also do like Microsoft Office. while you are subscribed, you can edit files. while you are not in an active subscription, you can only view. which would address your issue raised above about being able to open your files.

So ya, I haven’t heard anything w.r.t how exactly the subscription approach is going to work (link me if there is info posted somewhere about it). But my point above is…subscription isn’t always a bad thing… it allows for a more predictable revenue projections, which will ensure that resources go into continuing to develop and sustain the Axure ecosystem. I struggle to really think of very many things in life right now that are NOT subscription model… (rent, car lease, phone payments, Spotify, Netflix, etc), and in most cases the small payments over time vs the large upfront payment lowers the barrier for access for many.

I admit, it isn’t always comfortable for these kinds of changes…and depending on your usage, you may decide to move to another tool and thats fine. moving to the tool that best supports your process is usually the right move.

If nothing significant changes in the pricing model and the current update, I’ll probably end my 13-year friendship with Axure.
Here are just a few of my most important reasons:

Many of the adjustments to basic functions that have been demanded over the years have not been addressed. And I certainly don’t just mean my requirements.
To name a few examples:

The thread for feature requests was discontinued and reference made to the function in Axure. This is a no-go for me, requirements should be able to be viewed and discussed by users and Axure should be transparent about why and by when they are implementing something and why something is not. This is crucial for the quality of a software…

Since version 8, nothing innovative has been added, it’s just smaller function updates, bug fixes and multiple failed updates to the UI, which then had to be corrected again bit by bit. And even in version 10 there are no significant innovations that could make me switch to an expensive subscription model.

In fact, I even understand why they want to earn money with Axure again now, after even major updates were free. But at the moment it’s not worth $300 a year to me, even though I work with it professionally. Of course, everyone has to decide for themselves, and maybe I’ll change my mind.

I stopped using ALL Adobe software when they went to a subscription model. It is impractical, and just like automated answering services, it talks about being a better user experience but it’s only better for the business and the short sighted accountants who assess everything with a spreadsheet.
I love Axure. Yes, sure, it needs better UX (ironically) but it is the only tool that allows me to create prototypes that deliver on their purpose: to allow functional testing in a lifelike way (unlike tools like Figma, which are little more than glorified page click throughs).
However, Axure’s marketing is dire and their competitors are killing them (not least because of UI designers calling themselves UX/UI or product designers with no UX skills at all) with products that remind designers of, well, just more visual design tools, because that’s what they are (InVision, Sketch, Figma, etc).
UXTools.co did a survey (see image) - this was the “What tool do you use for prototyping?” results from over 3000 UXers:
UX Tool Survey 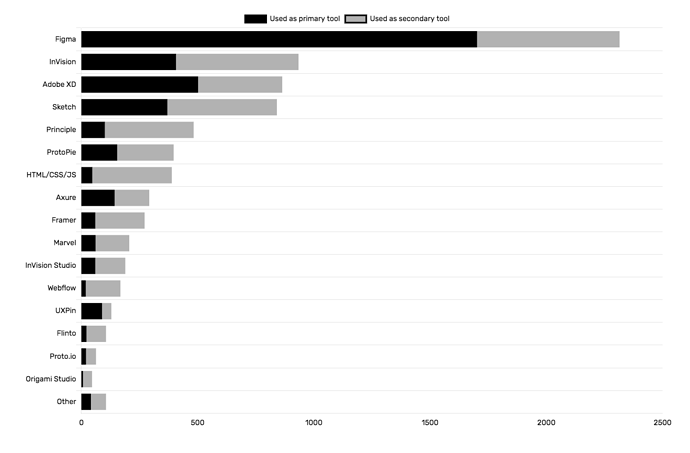 Axure, being the only real prototyping tool available, had a pitiful market share and was less popular than Adobe XD. It ranked 8th and this should ring massive alarm bells for Axure.
So, what do Axure do? They make their new software subscription! Genius. In a market where you’re being beaten, discourage new and existing advocates from using your software.
So I thought, maybe it’s just me who has a visceral objection to paying a subscription for software that I want to own. I ran a quick survey on LinkedIn open to UXers. Here are the results:
Subscription software poll 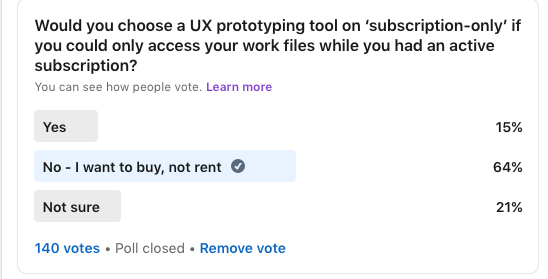 If Axure are not happy in 8th place then that’s going to look like they’ve won an Oscar once version 10 ships as subscription only.

Perhaps a few additions to this:
My impression is that a paradigm shift has already taken place in the UX field, at least that’s what I conclude from my projects. And the survey mentioned above also underlines this:
Since we are increasingly filling the web with standardised building blocks, classic mockups are less and less in demand, and certainly not any interactive mockups. What’s the point of another concept if it’s already established anyway.

With these changed requirements, the concept of a page can also be done by the designer or, vice versa, the design can be done by the conceptual designer. Or just from the “UX designer”. And Figma & Co are perfectly suited for this, no Axure is needed.
Many clients do not realise that this can lead to poorer quality. Often the experts demands are higher than those of the client

And usability tests often only serve to confirm an existing concept.

If it does become more demanding, i.e. new processes, elements or functions are added or a client has a lot of money to test already established elements (for example, a navigation system or an order process), then in my experience HTML tools such as Webflow are increasingly used. Or only static screens are shown and everything is explained in detail to the test person.
Or A/B testing tools are used when a website already exists.

I have the impression that Axure is still used more often in software development, but here, too, frameworks and technologies are increasingly being used in the run-up to development that enable rapid prototyping and, at the same time, the reuse of the sources.

These “trends” will certainly not make things easier for Axure.
And with the introduction of a rental model, many other software producers have already scared away their customers.
But I have never seen such a model corrected because of protests, so I am pessimistic.
There will probably only be a drop in turnover at the beginning, or maybe none at all, because the subscription model will compensate for it.