Going to Boston/Axure edition/Another game in the Fun with Random series!

Axure team is back with another game from the "Fun with Random" series! First, I would never forgive myself if I forgot to mention some of our unforgettable latest released games: Whack-Emoji, Proto-typer!, AxZee!, Spot the Difference, and Roulette, and not aging hits A Game of Cards, Rock, Paper, Scissors, Lizard, Spock, Grub Guess, and Something Monsters!

If you are not familiar with these gems, check them out!

Today I am bringing you the latest addition to our collection-“Going To Boston” dice game.

The rules of the Going to Boston game are pretty sweet and straightforward:

Each player, in turn, has three throws of the dice.
On the first throw, the highest number is put to one side. The remaining two dice are thrown, and the highest-numbered die is set aside once again. The final die is then rolled, and the total of all three dice is the player’s score. When all players have had a turn, the player with the highest score wins the round. For this game, your opponent is a computer.

The game canvas is divided into the player’s board and the computer’s board, with three dice for every player. There are six rectangles with randomized numbers behind dynamic panels. Each dynamic panel has six states, each state is a dice value. The number on the rectangle commands which side of the die is shown whenever a player rolls the dice.

The game starts when a player pushes the “Start” button. Every time a player clicks on the button, the dice values are updated and then added to a repeater table for the further count. I added a column to a repeater that counts and shows the greatest dice value in a round. Also, I set up a couple of variables to calculate totals after every round.

When a player clicks on the die with the greatest value, a set of conditions figures out several things. First, it disables all dice left on a player’s board. Second, it makes a die on the computer board disappear magically. 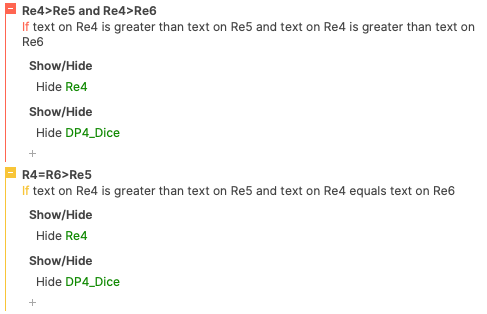 When there are no dice left to click on, the game’s outcomes are shown.

One of the challenges I encountered was adding more conditions that would not contradict each other in the same event. So, to fix this problem, I used several tricks. First, I added three buttons and programmed them to disappear by the end of their action. Also, I added a couple of hidden rectangles on the canvas. I connected them via a Move Action on the onClick event for every button and set the conditions for the enablement of every dice on the Player board. 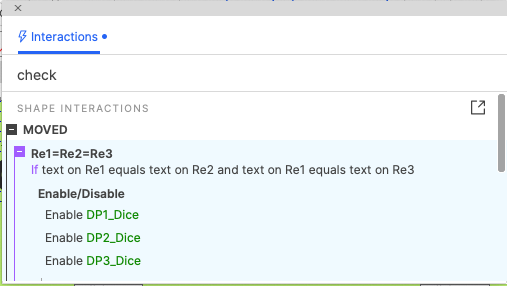 Enjoy! I’d love to hear any suggestions or feedback, so don’t be shy to bring them up!